Maxxis Bravo AT771 All terrain tyre long term test, with over 10,000km travelled on and off road

The orange Maxxis logo is synonymous in off road circles for affordable, capable tyres, so when Maxxis asked us to test their middle of the range AT771 tyre, we jumped at the chance. While it’s easy to get distracted with the high end tyre brands, sexy mud and aggressive all terrain tyres, tyres like the AT771 fill an important niche in the Australian tyre market. They’re the kind of tyres for those who need a bit of rubber to do everything - from the commute to work 95% of the time, to hitting the trails on the weekend, to the annual bush bash.
The AT771 is a middle-of-the-road (track?) all terrain tyre, that doesn’t have an aggressive looking sidewall, and offers black writing on one side, and white on the other - for those who have their boats floated by that sort of thing. 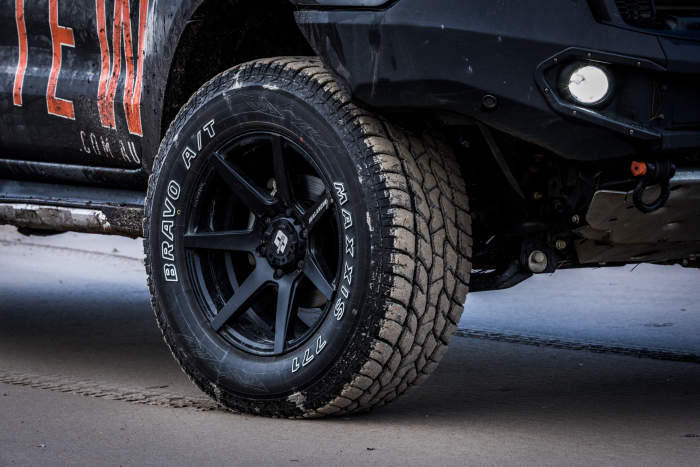 Maxxis state that the tyre tread has “multi-pitch noise reduction technology” and a “stiff but conformable carcass”. The tread pattern has relatively tight knit shoulder blocks, twin channels for water dispersion, and tight knit inner blocks as well. This gives all the signs of a tyre that will be quiet (er) on the road, handle well, and be a more predictable tyre. Does it deliver though? We’ll have to put that to the test!

One of the first things I noticed was that these tyres are on the medium to lighter side of the All Terrain tyre spectrum. Having come off testing a couple of more aggressive all terrains, I was looking forward to something that might have a bit more comfort, and the more conformable carcass that the 771s have has promised that. I decided to get the white writing mounted outwards as well, just for looks and giggles, plus it’d really show up for the photos.
It’s now been over 10,000km since the tyres were mounted, and I’ve certainly put the tyres through a variety of challenges. In addition to the usual 15km, twice daily commute, they’ve taken me on several trips including one that I’ll highlight here – a trip to the west coast of Tasmania.
The west coast of Tassie is a spot that gets under your skin, as it has so much to offer. While I was there we found some good sand and mud to trial the tyres on. We even encountered some snow on the way back over the central highlands.
On sand these tyres certainly bag out nicely. Heading out through the dry soft sand on the way to the actual beach, there was good traction all the way through, with no loss of control or bogging. Similarly, in the muddy areas that we found to play in, the tyres coped easily. While their tread pattern wouldn’t be best for a full on serious track, they’ll get you to 95% of the places that you want to go - with sensible driving. 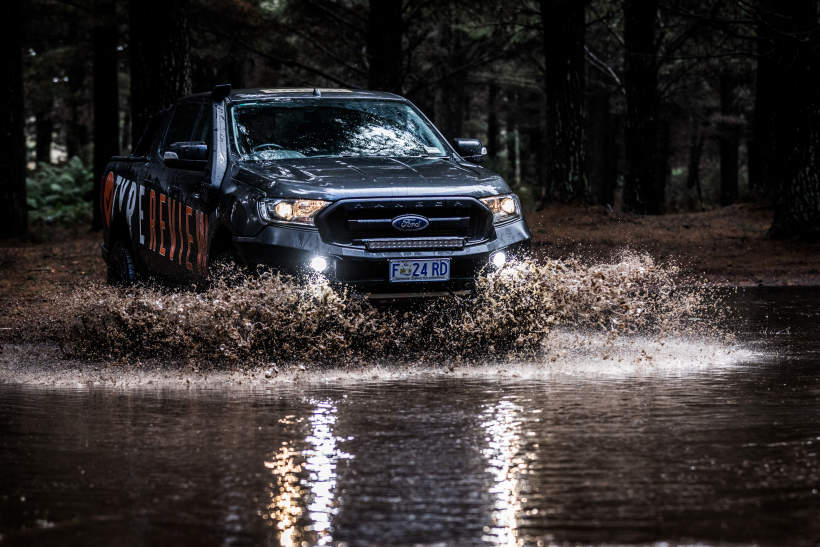 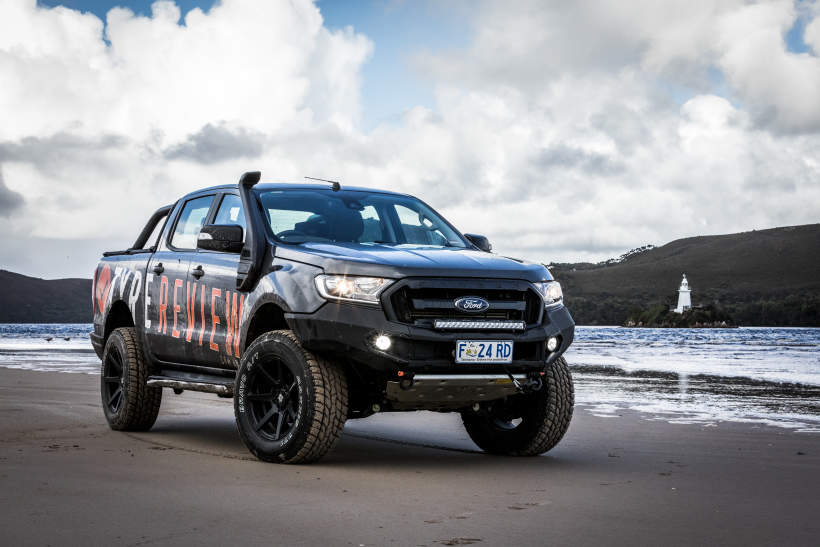 The snow on the way home from the west coast actually caught us by surprise! While the tyres carry an M+S rating, they’re not Three-Peak Mountain Snowflake (3PMSF) rated, which is something that I’d prefer to have if hitting the high country for a dedicated snow trip. That said, with some careful driving the AT771s didn’t slip at all, even when we found some back tracks to venture down for the sake of snow photos. 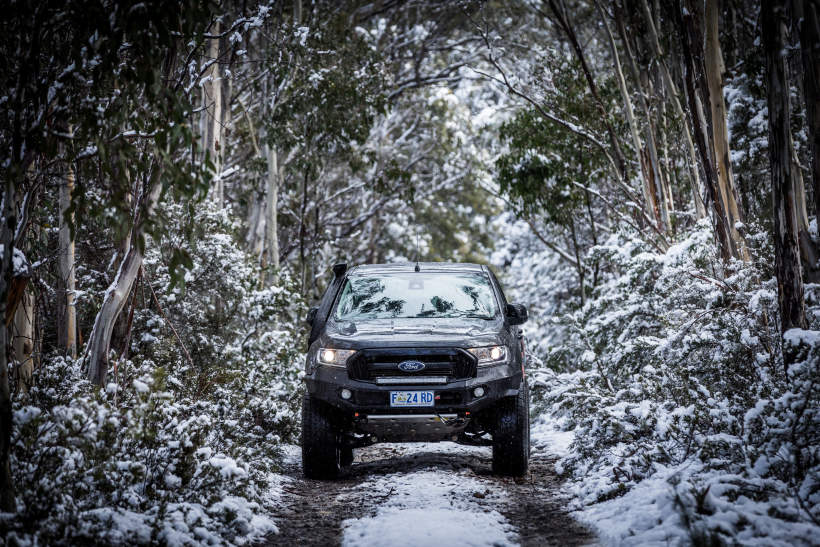 I also used these these tyres on the farm in some muddy, clay-ey conditions and found that while the tread packed with mud a little at low speed, they certainly didn’t slow down progress and cleared okay once the speed got up again. Nothing to complain about there.
One thing I did notice with the 771’s is that the white writing got dirty pretty quick. Now, this is probably going to happen to any tyres with white writing on the sidewalls, but I hate cleaning my car and only do it every now and then. If you’re like me, and don’t hugely value the look that the white writing adds to your vehicle, I’d recommend getting the white writing mounted on the inside, and the black on the outside. Cleaning the writing was relatively easy, but having to do it every 2 – 3 months was a bit of a drag. 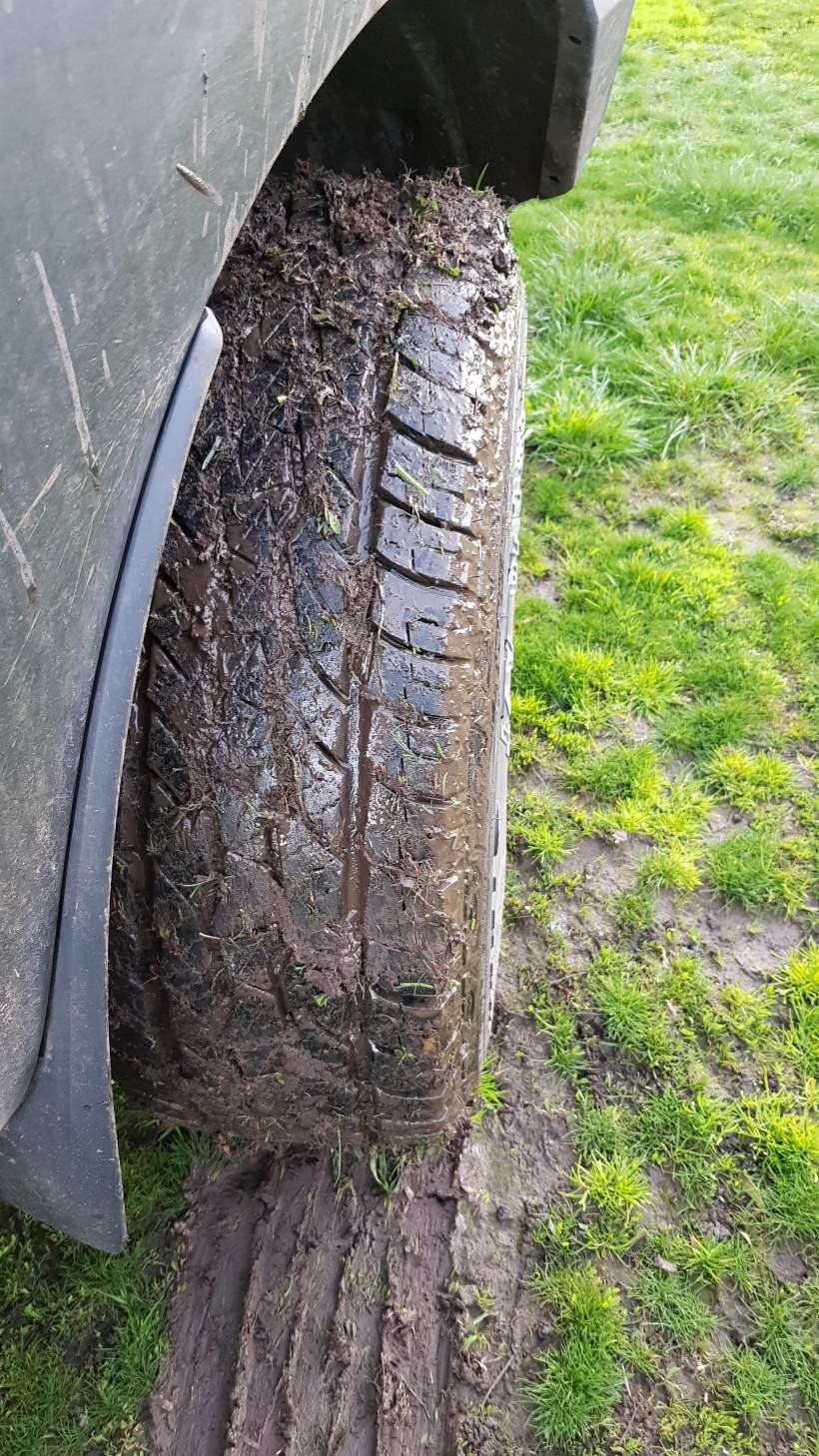 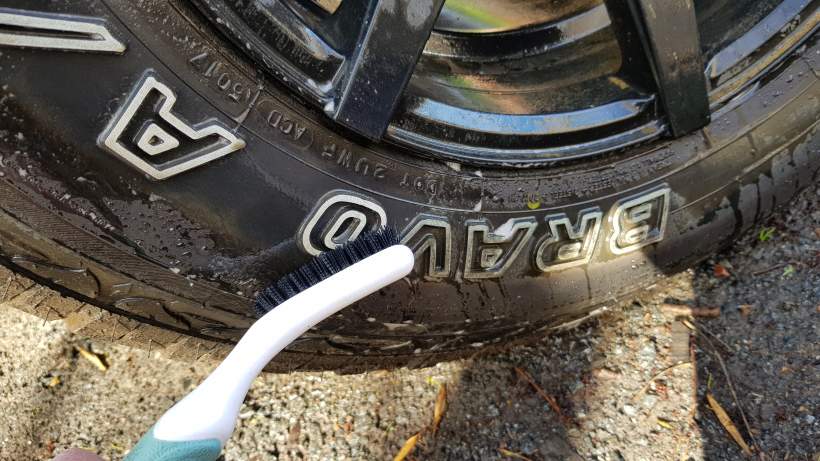 The Maxxis Bravo AT771 is a good tyre. You’re going to be able to get it at a reasonable price and it’ll fulfil the wants of about 97% of the tyre buying public in this category. I’d recommend the Maxxis Bravo AT771 for family SUVs, dual cab utes that go for the occasional trip, tradies who get onto boggy work sites etc, that all need a tyre that will get them out of trouble when called upon, all while offering a comfortable ride and good handling characteristics for the rest of the time.
I have found that the tread is wearing quite quickly. I didn’t get a measurement before I started using these tyres, but the website states that the size of tyre tested should have 13.5mm to start with. After 11,200km of reasonably hard driving that’s now down to 9.9mm of tread depth on the vehicle, which means that (based on our incredibly sophisticated back-of-a-beer-coaster maths system) I’ve probably got about 26,133km left on these tyres for a total of 37,333 km. Someone who doesn’t drive as hard will most likely get more distance out of their tyres, but at that wear rate, tyre rotation is going to be really important. Rotate them every 5,000km to 10,000km (every time you get the vehicle serviced is a good rule of thumb) and they’ll wear evenly and won’t get noisy. 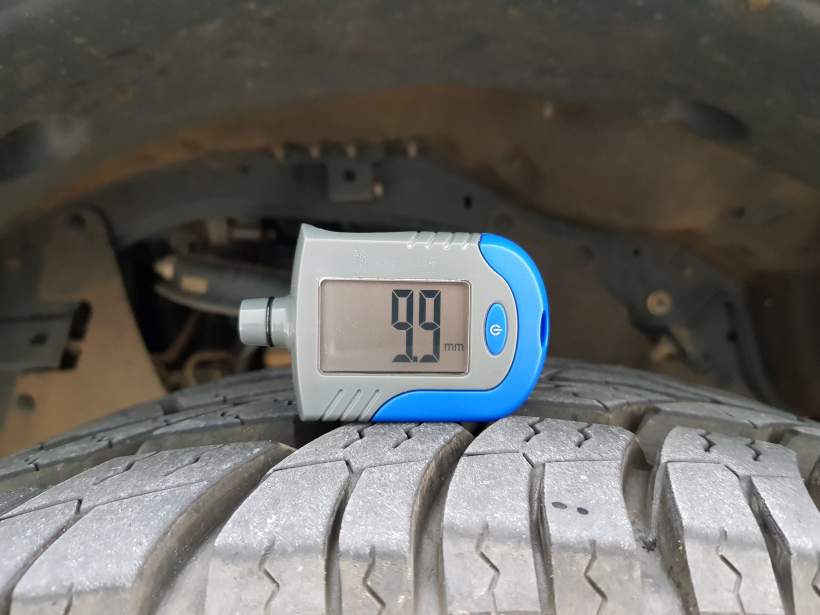 On the trips I took these tyres on, I had no complaints. I certainly didn’t expect to be able to thrash them through serious trails like some of the more aggressive all terrain tyres that I’ve used recently, but when pushed, they answered. 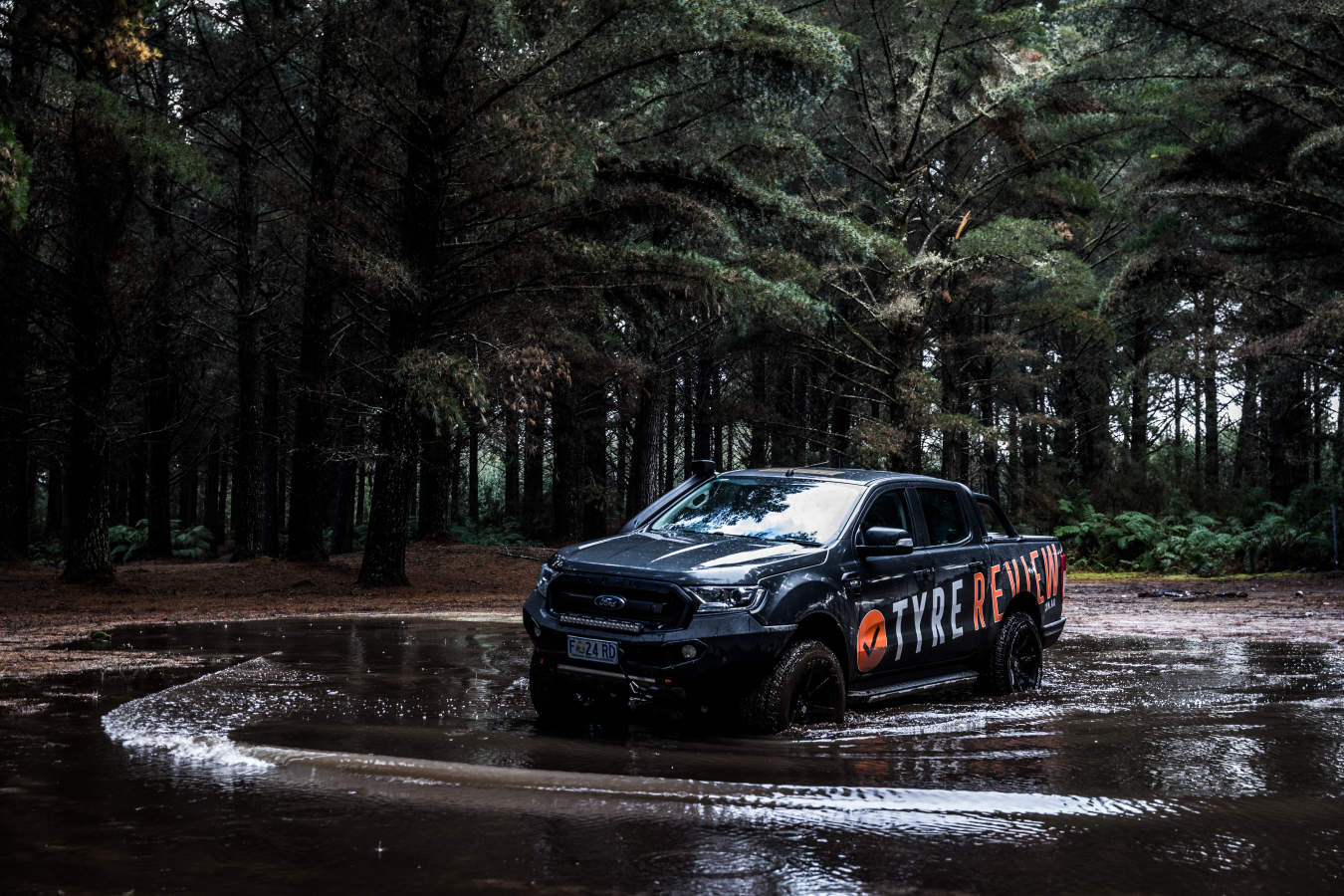 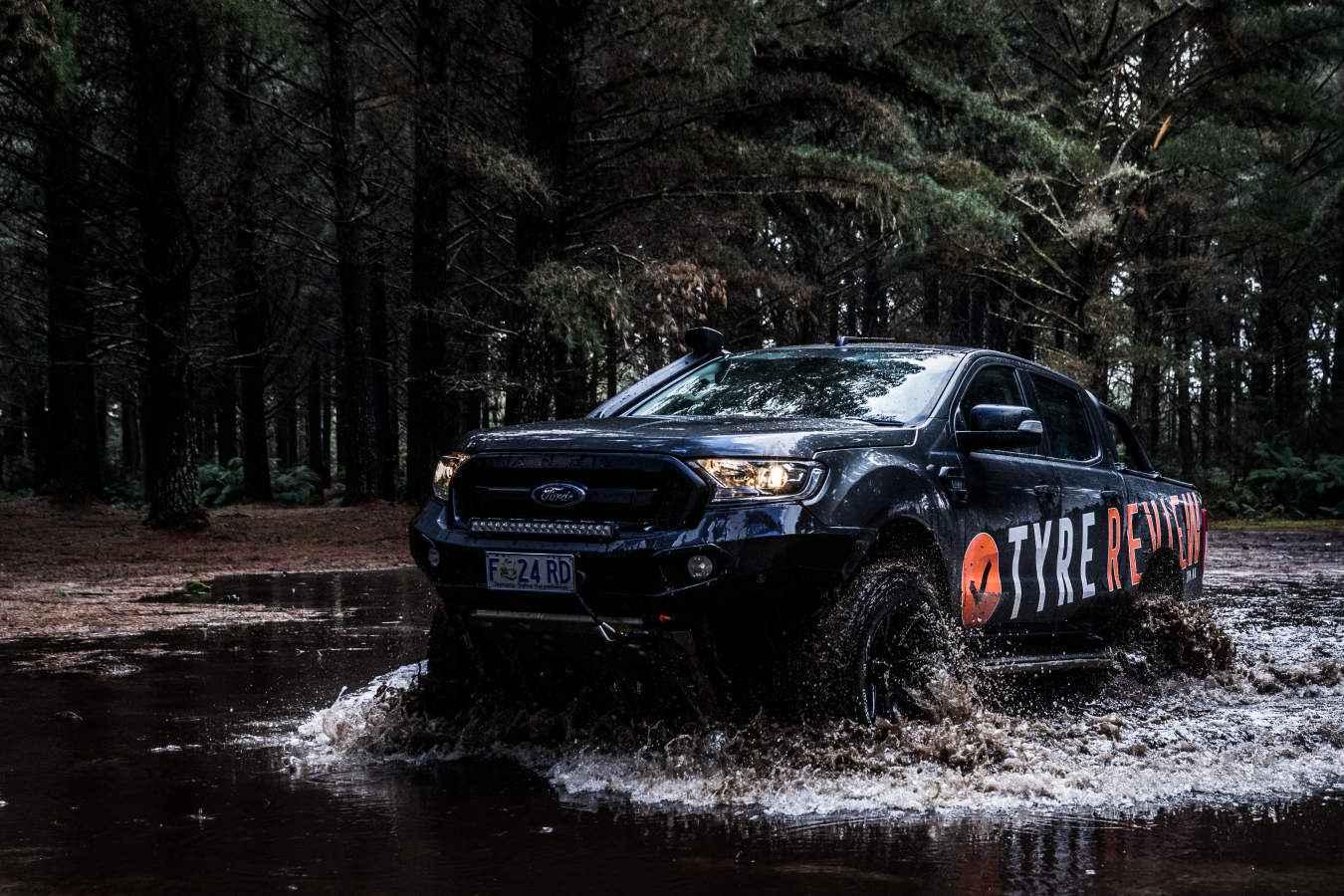 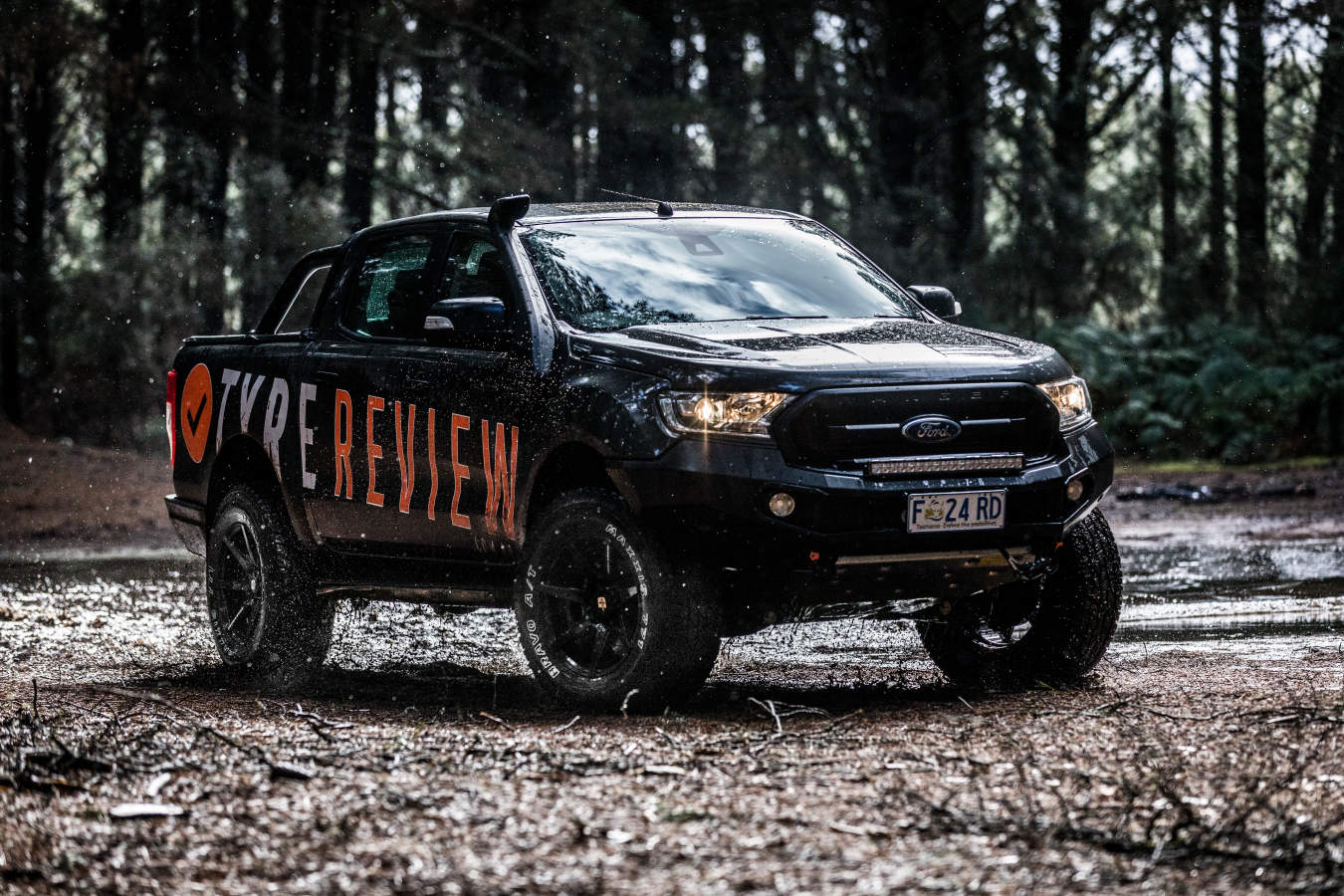 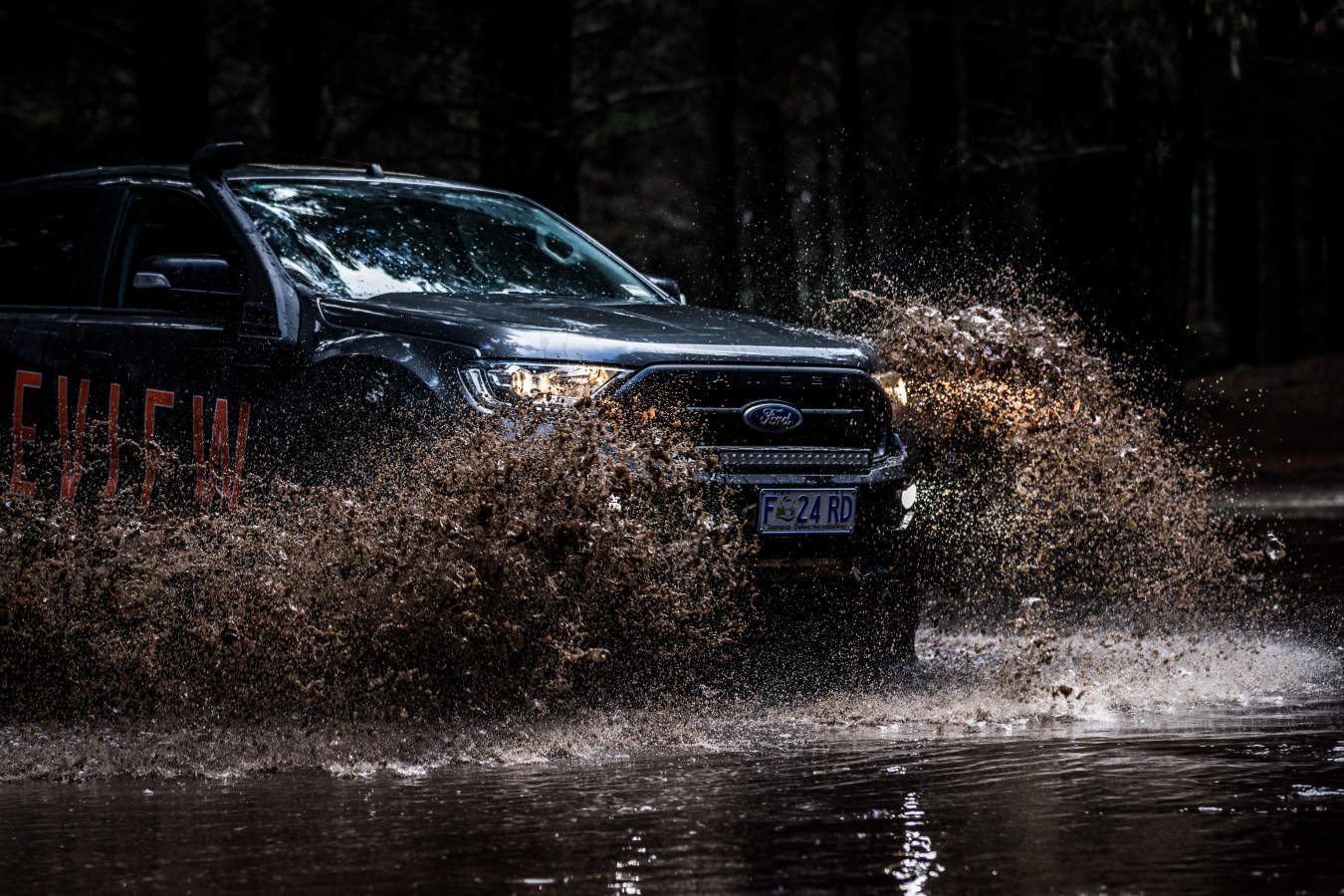 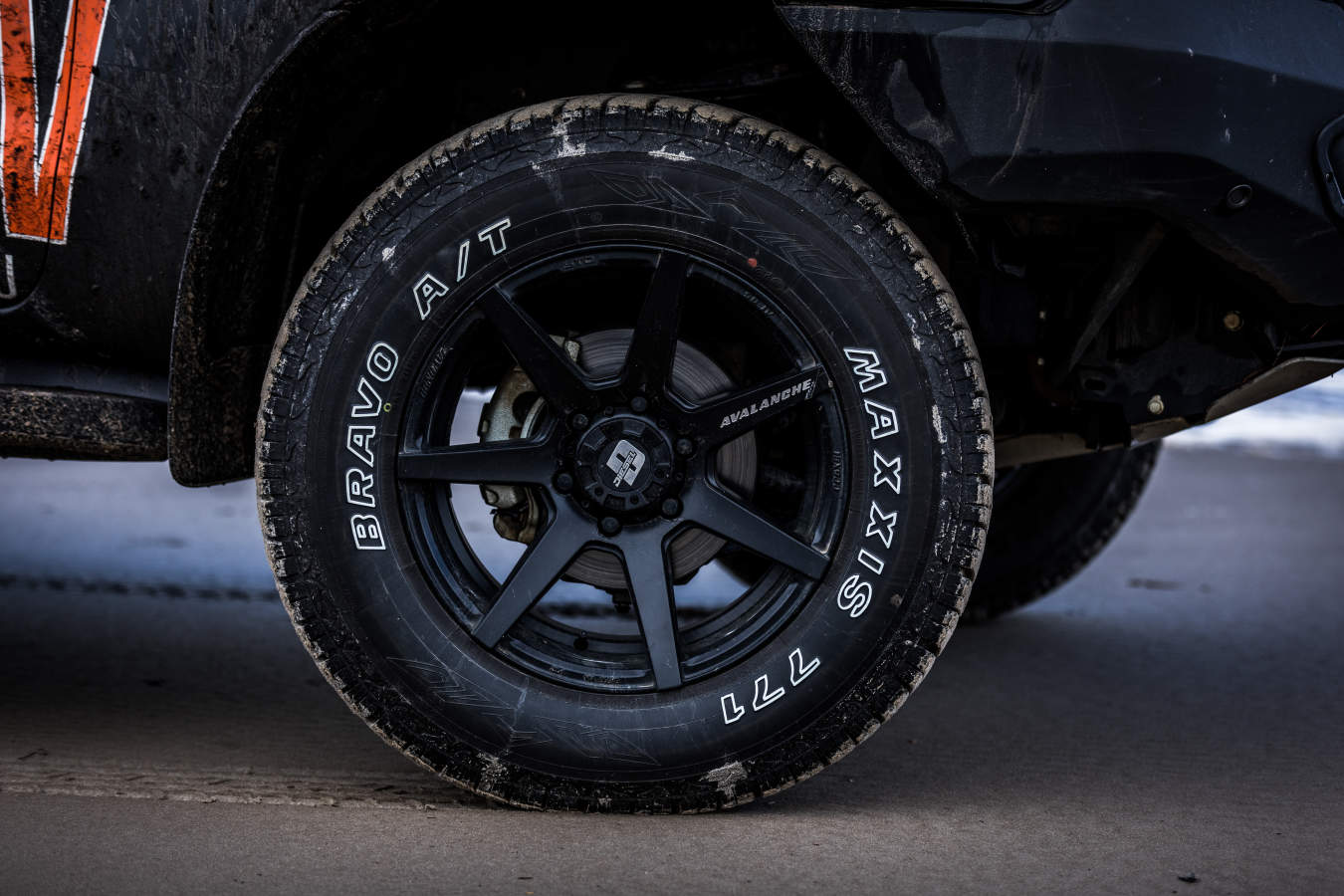 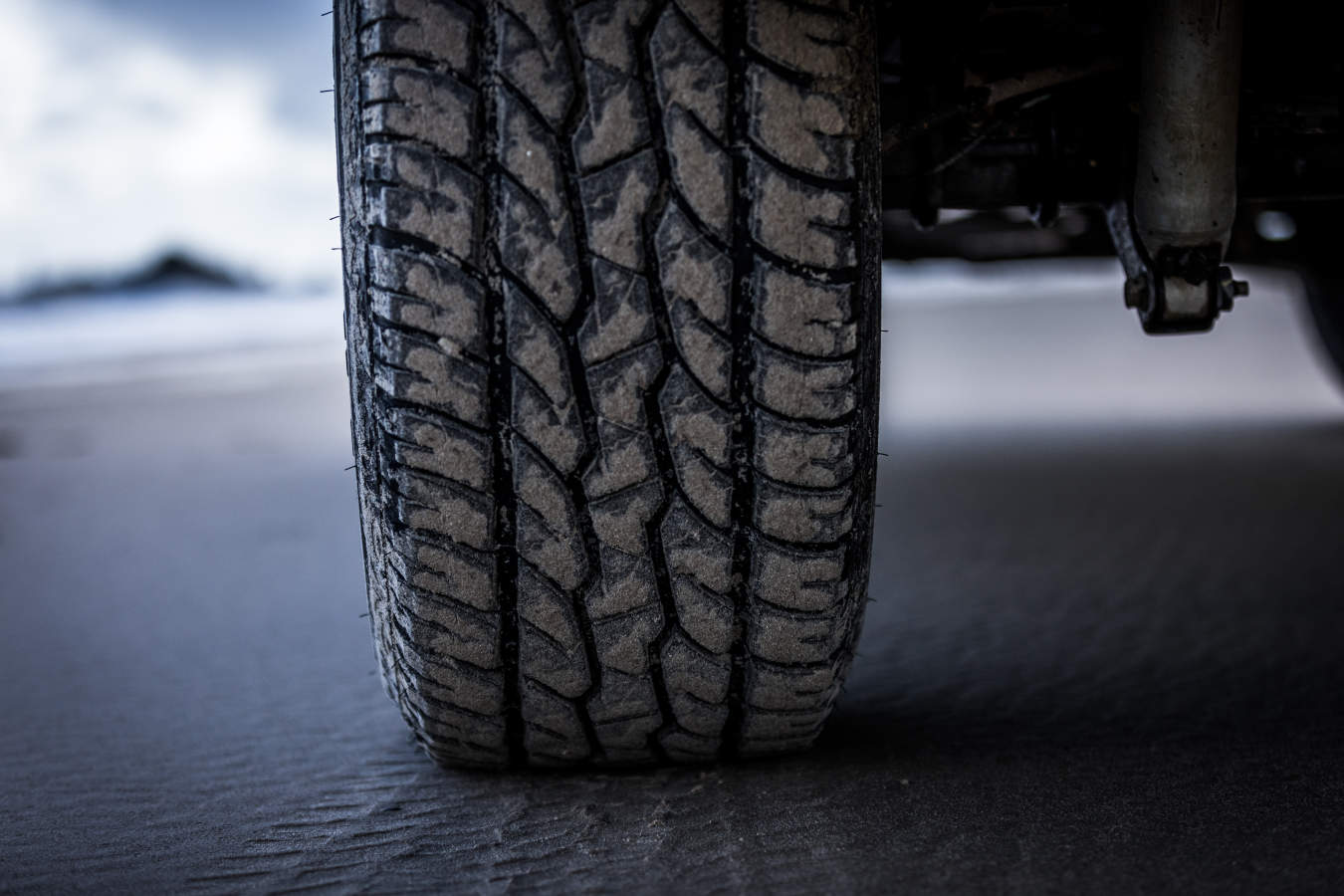 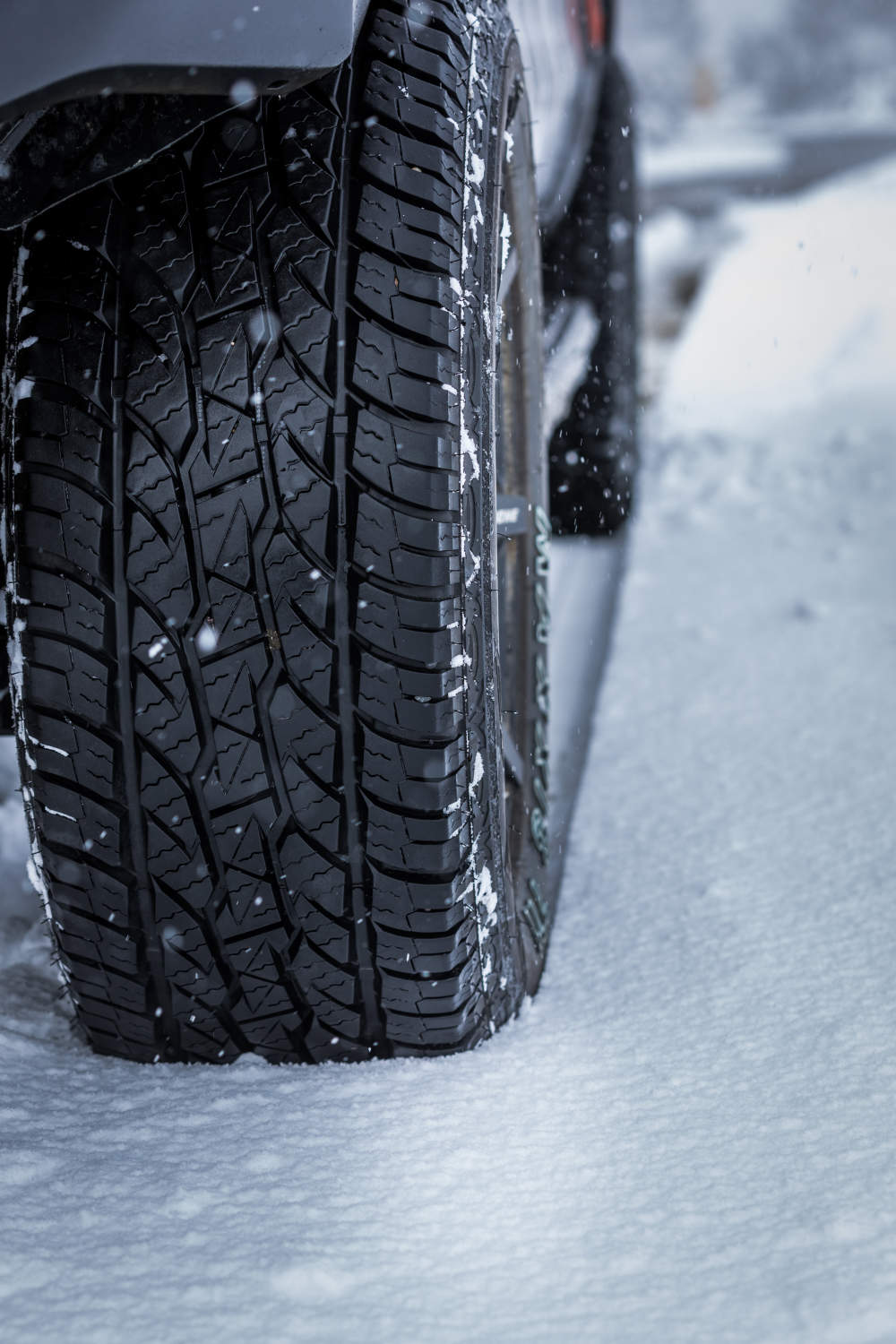 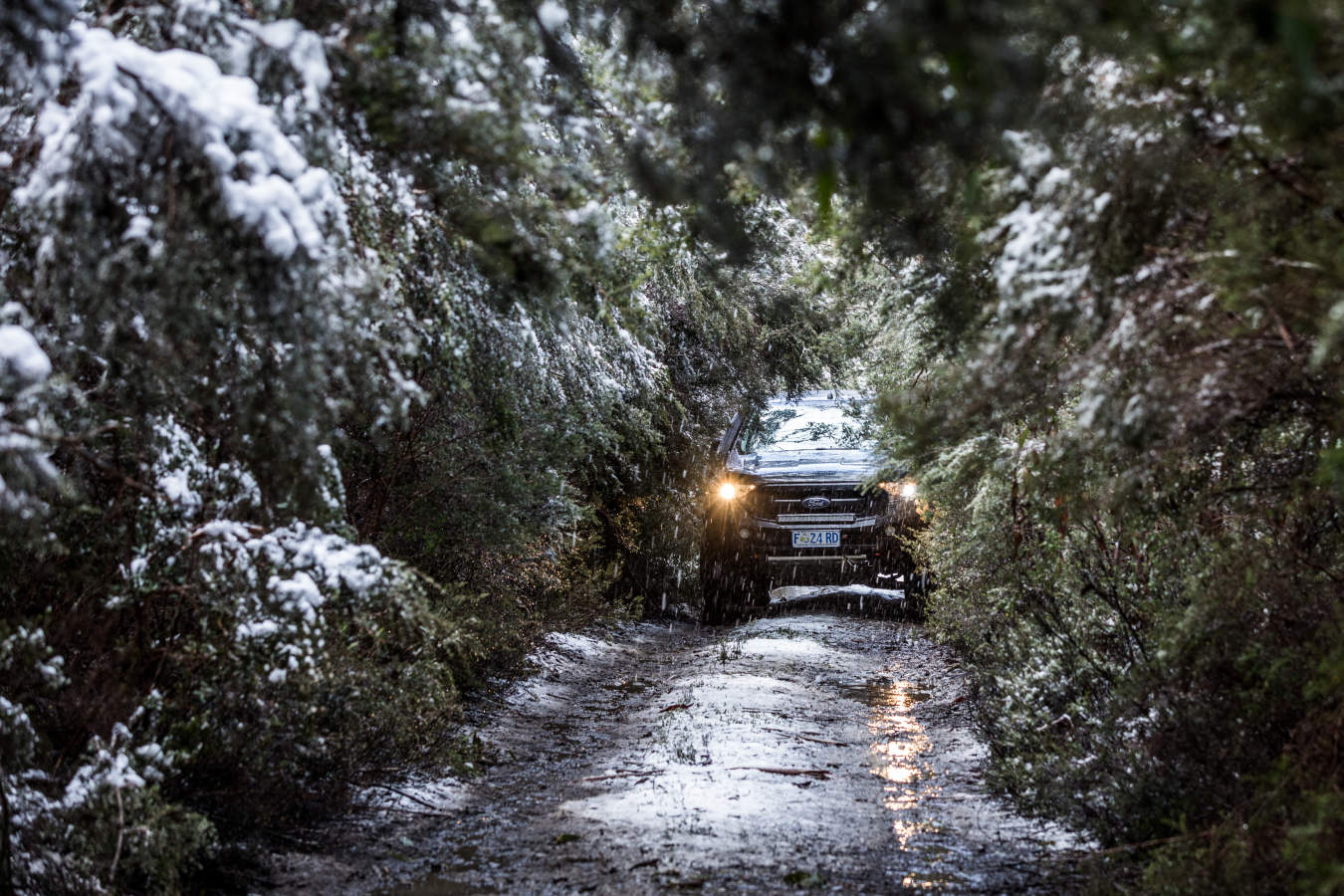 The time that these tyres shone, actually, was on gravel roads. One time in particular I was returning from the north east of Tasmania on gravel forestry roads, which were shot to hell, but I kept pushing and pushing and the tyres soaked up all the bumps and lumps and turned it into a pretty cruisy experience. That’s not something that I would have expected from tyres with a heavier build, but it’s certainly possible with these tyres.
Wet weather traction is another area in which these tyres shine. In the dual-cab-ute-with-nothing-in-the-back-on-a-wet-roundabout test, they perform very well. Even as recently as the last couple of days I was using these tyres, I found that I didn’t have to take roundabouts any less aggressively than I do in the dry (not all the time, just sometimes), and while a dab of excessive accelerator action does kick the traction control in, you shouldn’t be doing that unless you’re purposely trying to create a public nuisance 😉
Tyre noise is an interesting one. These tyres aren’t loud, but they’re definitely there. It’s more background white noise than an aggressive tyre howl, or even whir. I don’t feel like I have to turn the radio up at all, and it doesn’t drown out the sound of the kids in the back, unfortunately.
So, in short, the Maxxis Bravo AT771 is a reliable, well priced tyre that will suit family SUVs, tradies and anyone else who would be looking for an all round all terrain tyre that will be reliable in the wet, good in the dry, and reasonably comfortable.
Approximate prices (3 stores mystery shopped)
Range (smallest to largest tyres available): $191 - $383
Size tested retail price: $332 (285/65/18)
Note that the size tested was 285/65R18, as Maxxis supplied this size from overseas. We've indicated a 285/60R18 as that's the closest Australian Delivered size available.

We take a look in the studio at the Maxxis Bravo AT771, which will be equipped to our Ford Ranger for long term testing.Read the full article >

We've driven the Maxxis Bravo AT771 for over 10,000km - check out our opinion on the tyres here!Read the full article >