Check out our in-depth written tyre review of how the Yokohama Geolandar X-AT G016's fared on the 2017 Ford Ranger.

A Reviewer's Rides of a Mitsubishi Lancer 2003. Jared talks to Ash about his 2003 Mitsubishi Lancer, the tyres and the modifications that have been done over the years.Read the full article >

Reviewers ride of the Tyre Review Ford Ranger. Jared takes us through the additions and modifications performed on the 2017 Ford RangerRead the full article >

The Yokohama Geolandar X-AT was released in 2019, and in fact we were among the first to get our dirty mitts on them! This tyre is designed to be a crossover between the go-anywhere, do anything all terrain market, and the I’m-so-hardcore mud terrain market. Effectively it cherry picks components from both tyre types and combines them into a package for you and I.
To start off with, the tyre pulls its casing from the G003 MT (or something pretty damn close to it), which means it has three ply sidewalls, rather than the two that most all terrain tyres get. This means that there’s three layers of material between the air inside and the air outside, which should make it tougher and more puncture resistant, but that’ll also reduce the comfort to some degree as well, as it decreases sidewall flex.
The tread pattern pulls inspiration from both the AT and MT sides of its personality, with more tightly spaced blocks in the middle, and wider spaced shoulder blocks. I actually was surprised that they weren’t spaced slightly wider on the shoulders, to give the tyres more of an aggressive tread pattern and better off road capability, similar to some other cross over tyres out there. The centre blocks have a combo pattern going on that allows them to provide plenty of tread on the road at any one time, but also offer up lots of angles when you’re on the dirt, to assist with digging in. 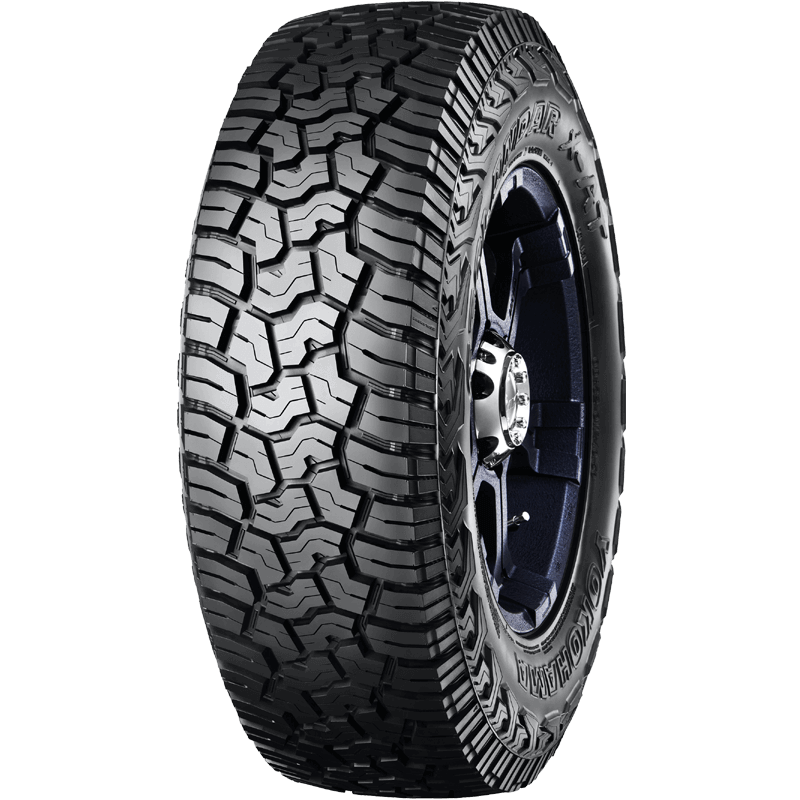 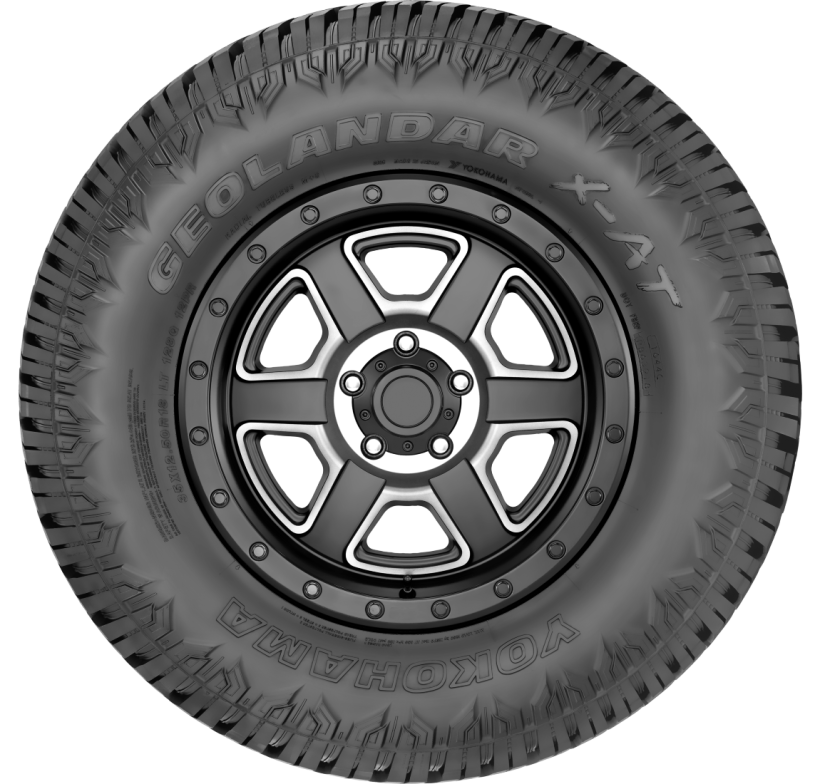 On the shoulder you’ll spot that they’ve got two different types of sidewall protectors. One side is more angled daggery things, while the other side is more straight up and down daggery things. Both will help with punctures in that area, as well as potentially some digging ability if you’re stuck in the muck.
Yokohama also state that they’ve worked to create a quieter ride with the tread staggered in five pitch variations across the tread blocks. They’ve also mentioned that the tyres have zig-zag grooves in the tread, which should interrupt airflow within the pattern and hence limiting road noise. Both of these should contribute towards a quieter cabin, but given that the tyre pulls on mud tyre DNA, it was interesting to see how that performed in real life.
As an overall package the X-AT offers a great looking tyre that’s packed with technology, and promises to deliver performance on the road, on the track, for people who are doing both on a more regular basis.

I rolled on the Yokohama X-AT’s for about 7 months, and in that time I had the opportunity to test them on everything from snow to mud, gravel to long highway drives.
One thing I did do, just so I had a comprehensive overview of the tyre, was to spend about an extra 1500km with the Yokohama G003 MT strapped to the car, rather than the X-AT. This meant that I could get a feel for where part of the X-AT DNA had been pulled from, as I’d also used the G015 AT previously as well.
In comparison, the MTs were louder, harder to control in the wet, had a less comfortable ride, and at low speeds you could really feel each tread block hit the road, particularly when turning a corner into a driveway or similar. I noticed that the dry traction of the MT was noticeably lower than the ATs that I’ve been testing recently, too.
Back on the X-ATs, one of the key day-to-day things I noticed was that they’re certainly not as quiet as the other ATs that I’ve been testing recently. Particularly around 80kph, there was a noticeable tyre noise in the cabin. It was actually this noise that made me try the MTs, as I was wondering how different they would be… well, the MTs are considerably louder again, and they made the X-ATs seem like they were quiet as a whisper. So, there’s definitely cabin noise, and it’s a higher pitch than the roar of some other tyres, but it’s nowhere near as much noise as you would expect from an MT tyre. 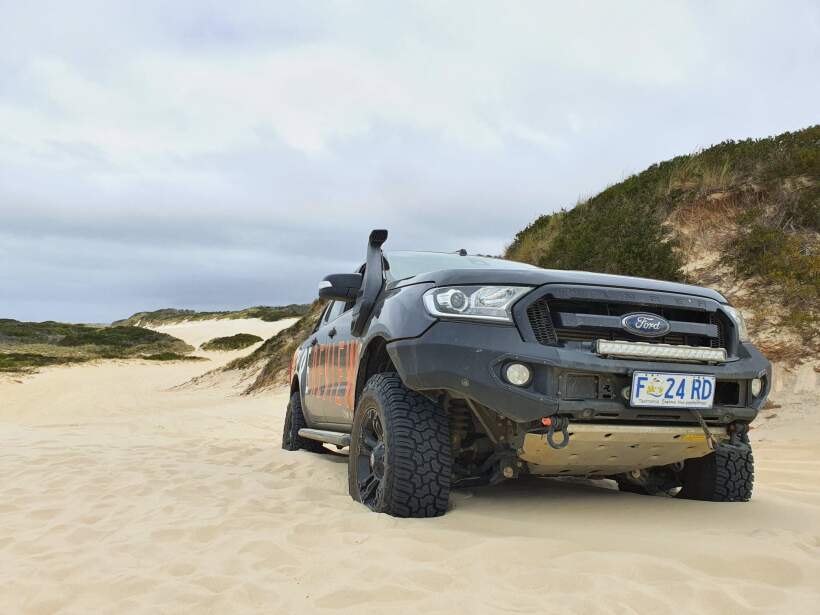 Dry traction is another area of minor concern. I found that emergency turns at lower speeds were likely to lead to more oversteer than other ATs, but it was on par or slightly better than the Yokohama MTs I tested, so that’s part of the package you get for choosing a tougher tyre that will take you further when touring or beating the hell out of it off road.
Piloting these tyres at speed on the blacktop or gravel was an absolute pleasure, and they actually earned some bonus points for coming to a complete stop from 80+kph on gravel when someone pulled out in front of me on back road. I was quite impressed at how quickly they pulled up!
In terms of adventuring, one of the first outings for these tyres was a trip to the snow, where they filled with snow nicely, and allowed excellent control over the highland Tasmania tracks we toured through. There was no trace of sliding in the sub-zero temperatures and fluffy, foot deep snow, despite the tyres not having the 3 Peak Mountain Snow Flake (3PMSF) rating that I tend to look for. 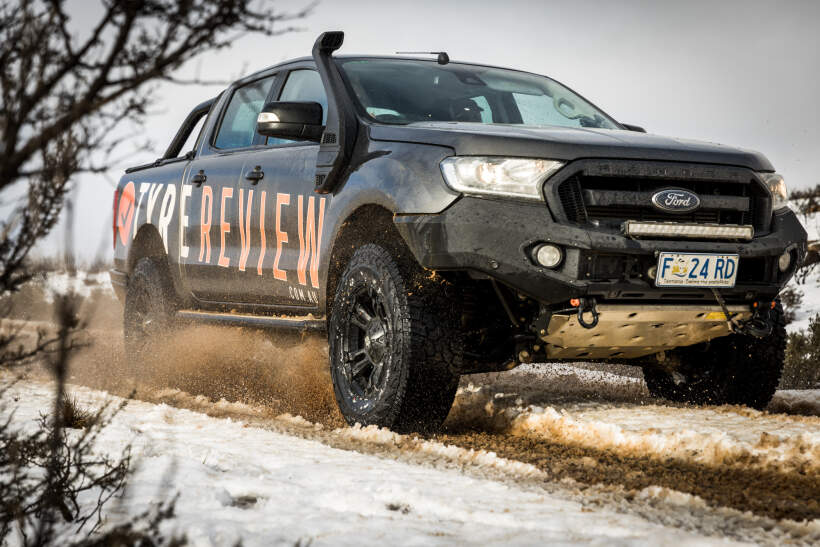 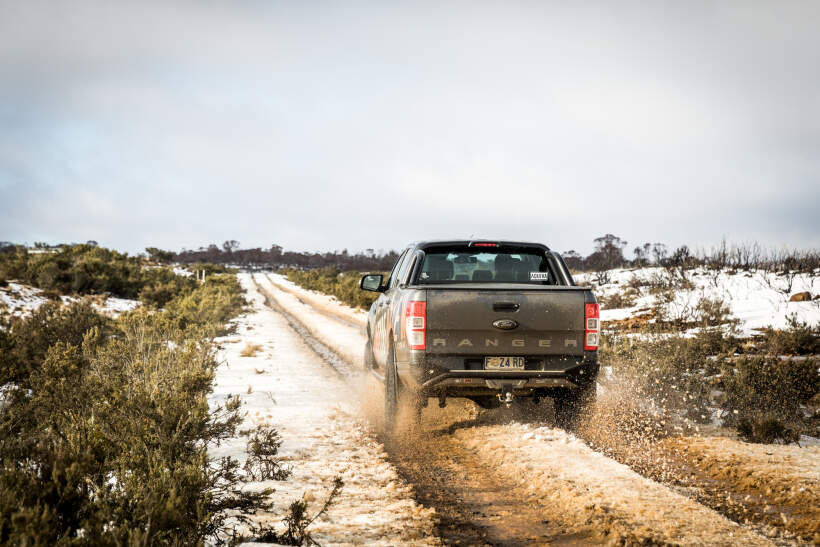 On the way back I found a little side track just off the road to have some fun on, and the tyres certainly loved every minute of that… and so did the kids in the back of the car!
I got to put these tyres through their paces on a variety of other tracks, and they had no trouble hooking up on all surface types. Out at the farm, where I find that lesser ATs will fill with mud quickly when it’s wet, due to the clay soil, these tyres stayed as clean as a whistle.
In fact, the tyres only failed me one time on a creek crossing at the farm, which was probably more user error as I bellied out and the tyres couldn’t pull me out! 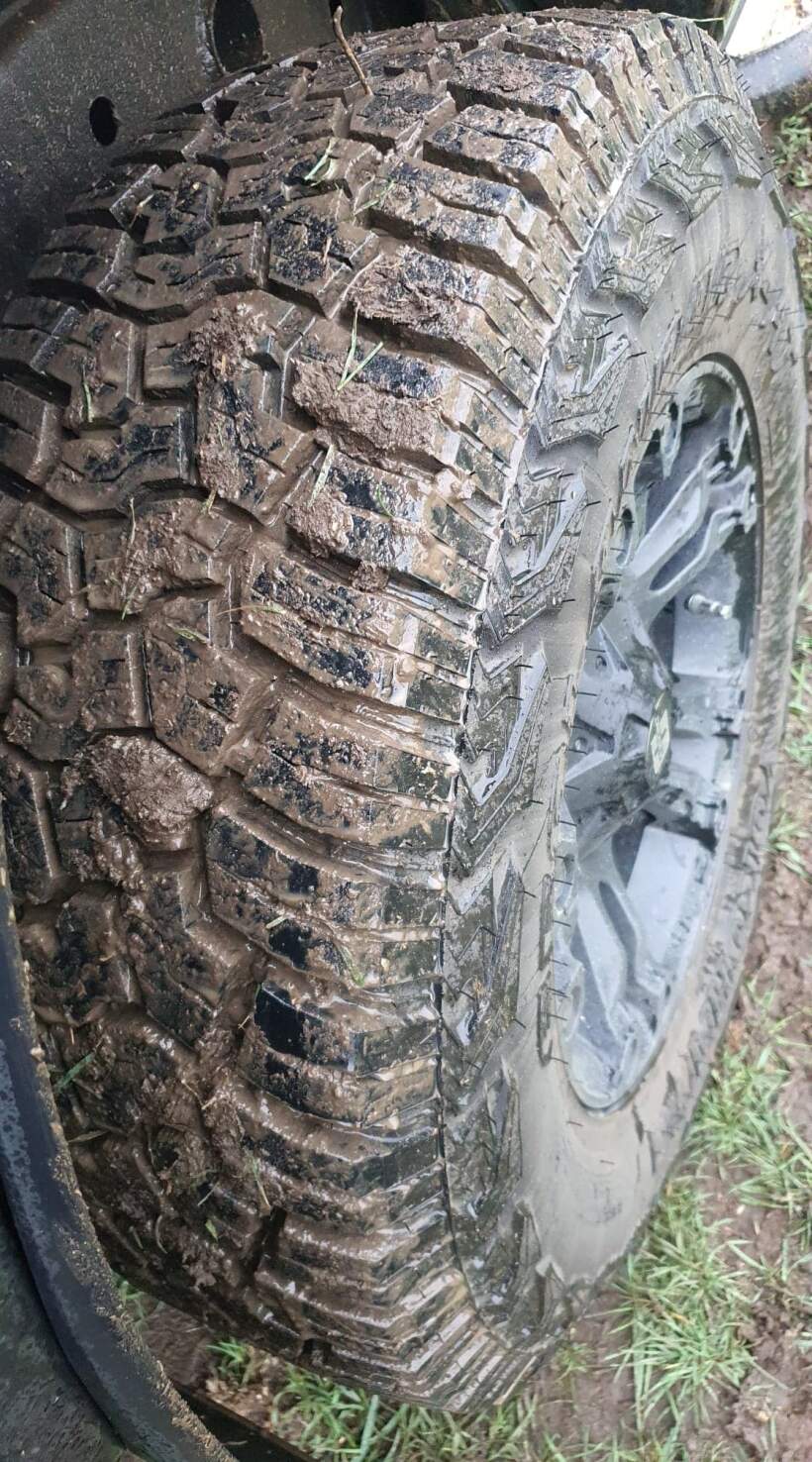 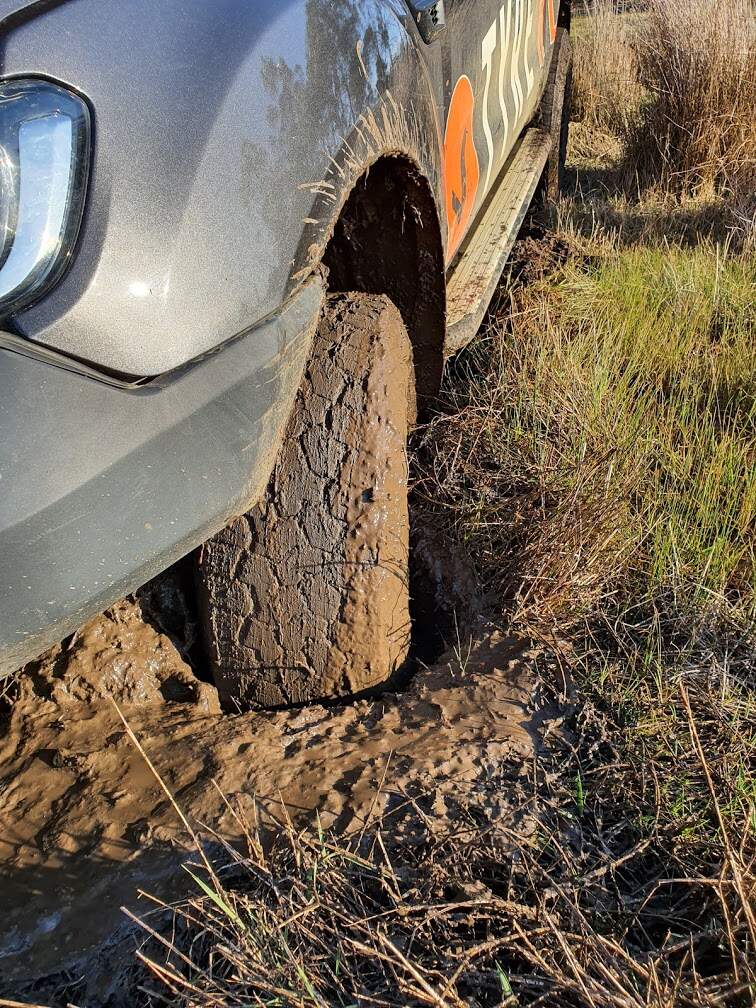 The Yokohama X-AT’s were faithful friends for the six months or so that I had them on the car. They have the looks and charisma to win people over, but they did have a few little characteristics that you need to consider, if you’re looking at purchasing these for your rig.
First up, these tyres are completely at home on the tracks, whether it’s in the mud, dirt or on rocks, they hold their own admirably. Their solid carcass means you’ll need to air down a little more than you would with a lighter AT tyre, but that’s a small price to pay for more durability.
I didn’t notice much crud getting stuck in the tread, which is great
For day-to-day driving, they’re also easy to get along with, aside from some tyre noise which I found at it’s most noticeable at roughly 80kph. Rather than being just a rumble, it had a touch of a pitch to it, so perhaps entered the cab more than other ATs I’ve tested recently. Don’t get me wrong, though, it’s nothing compared to the noise of the MTs, and so much easier to put up with for longer stints of driving. In comparison to other ATs, though they’re a little on the noisier side.
On the blacktop, in the dry, they’re very predictable, and don’t mind a little spurt through the twisties. I didn’t feel the blocks squirming, and they had nice turn in, for what they are. The low to medium speed dry grip felt a little lacking, though. I noticed it first when making a last minute turn into a driveway, and I could definitely feel the front end slipping away a little more than I’ve noticed with other AT tyres. Then on medium speed T-junction turns, it’s relatively easy to get a broad yell from them as they find their limit and start to slip. The thing is that they slip very predictably, rather than gripping, gripping, and letting go. As much as you can get it to slip on a diesel Ranger, anyway! 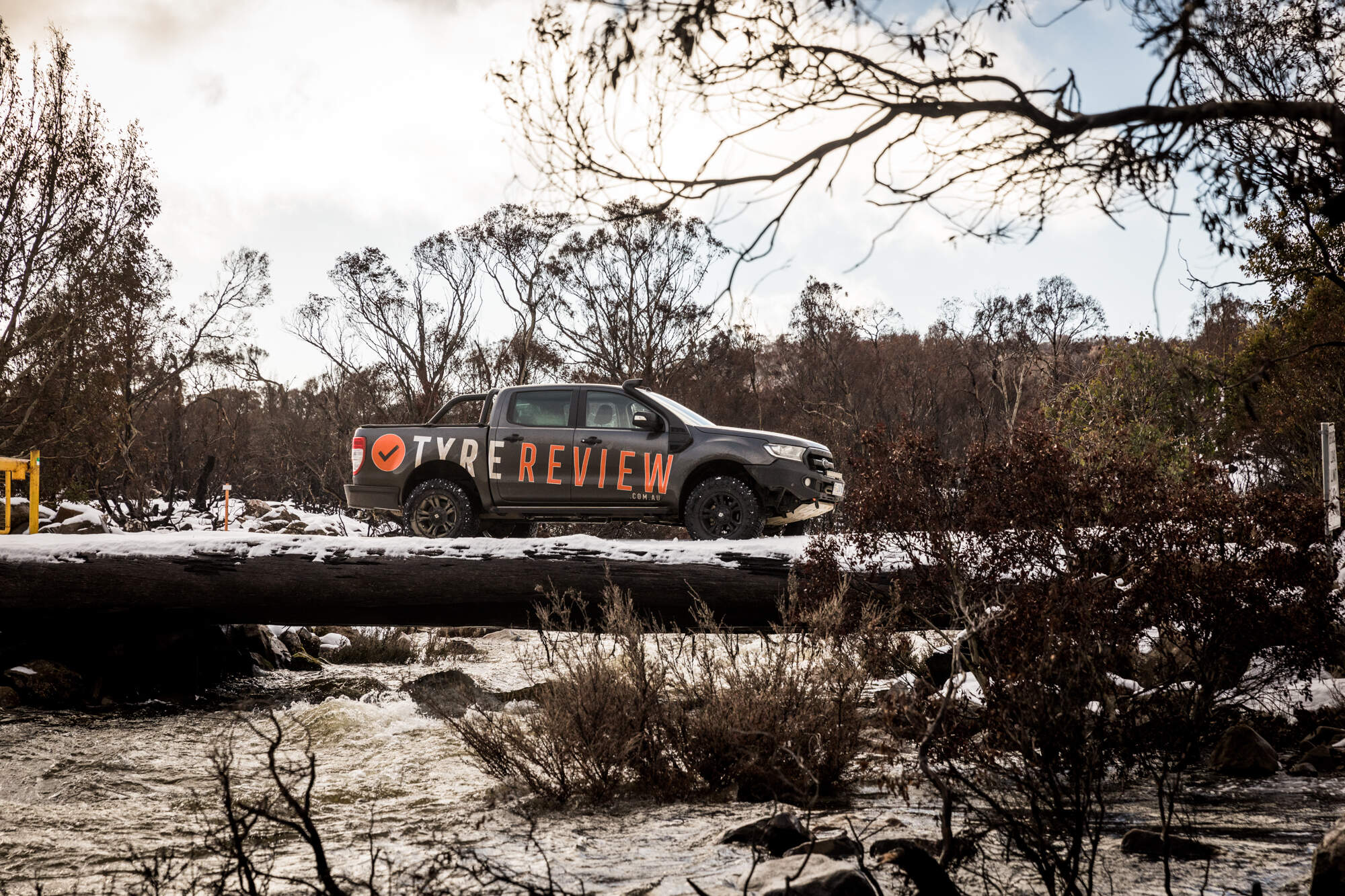 It was in the wet that they showed up some of their MT tendencies. At slow speeds, around roundabouts, they tend to both understeer and oversteer at different points of the roundabout, so I did have to take it reasonably gingerly through wet corners at low to medium speeds. I mean, you’re supposed to drive to the conditions, right? It’s my job to drive past the conditions and see what happens, so do as I say, and not as I do!
In terms of tread wear, the 285/70R17 tyres started out with about 13.4mm of tread, and now have an average of 11.2 after 13,499km of hard driving. Using back-of-a-beer-coaster maths, that means I could be looking at another 53,382km before they desperately/legally needed replacing, should they wear linearly, and a total of 66,181km. That’s pretty good, as ATs go, and based on the price of the size I tested, you’re looking at $0.54 per 100km travelled, based on those estimates.
The thing it comes down to here, though, is that if your choice is between the MT and the X-AT, and you’re not going to be thrashing your car through bogs for most of it’s off-road life, I think your better choice, by far, is the X-AT. It’s far milder mannered on the road, very capable off-road, will probably last longer, and has the durability of the MT carcass. If you’re the touring type who would usually go for the MT and put up with the associated cantankerousness, then the X-AT is a viable choice for you.
For the rest of us, if you’re looking for a tough tyre that’s got more aggressive tread blocks than the average AT, and you’re happy to pace yourself in the wet, then it’s worth looking at the Yokohama G016 X-AT. 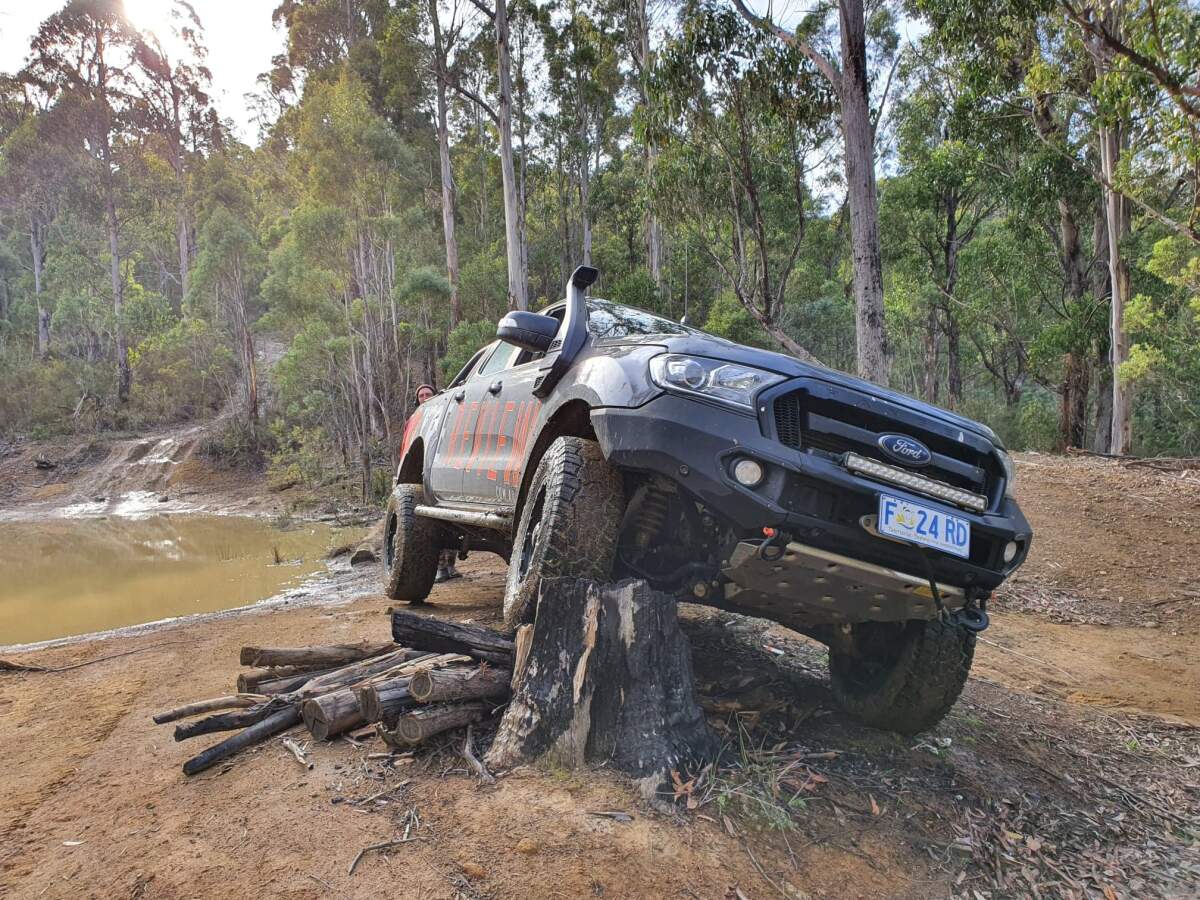 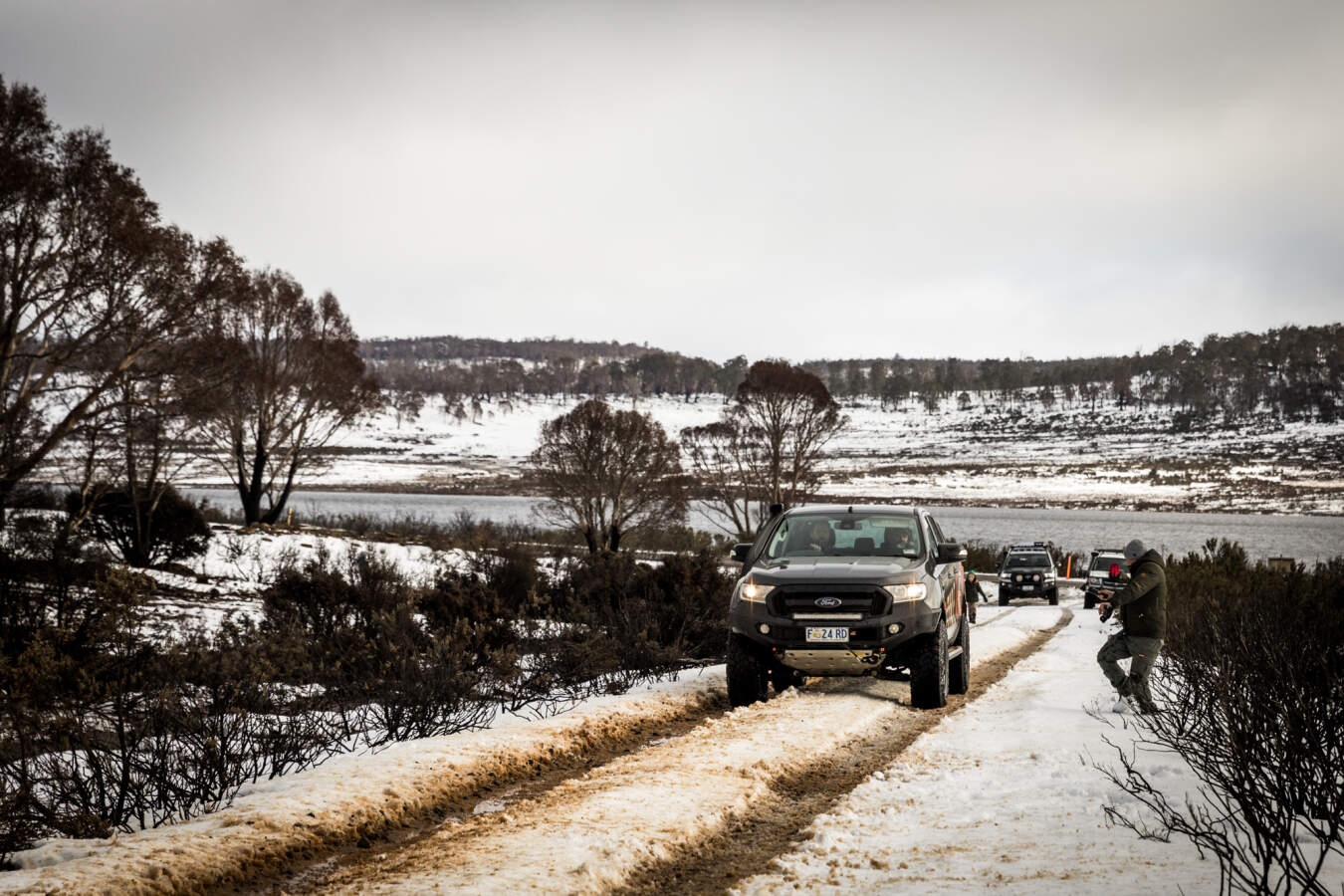 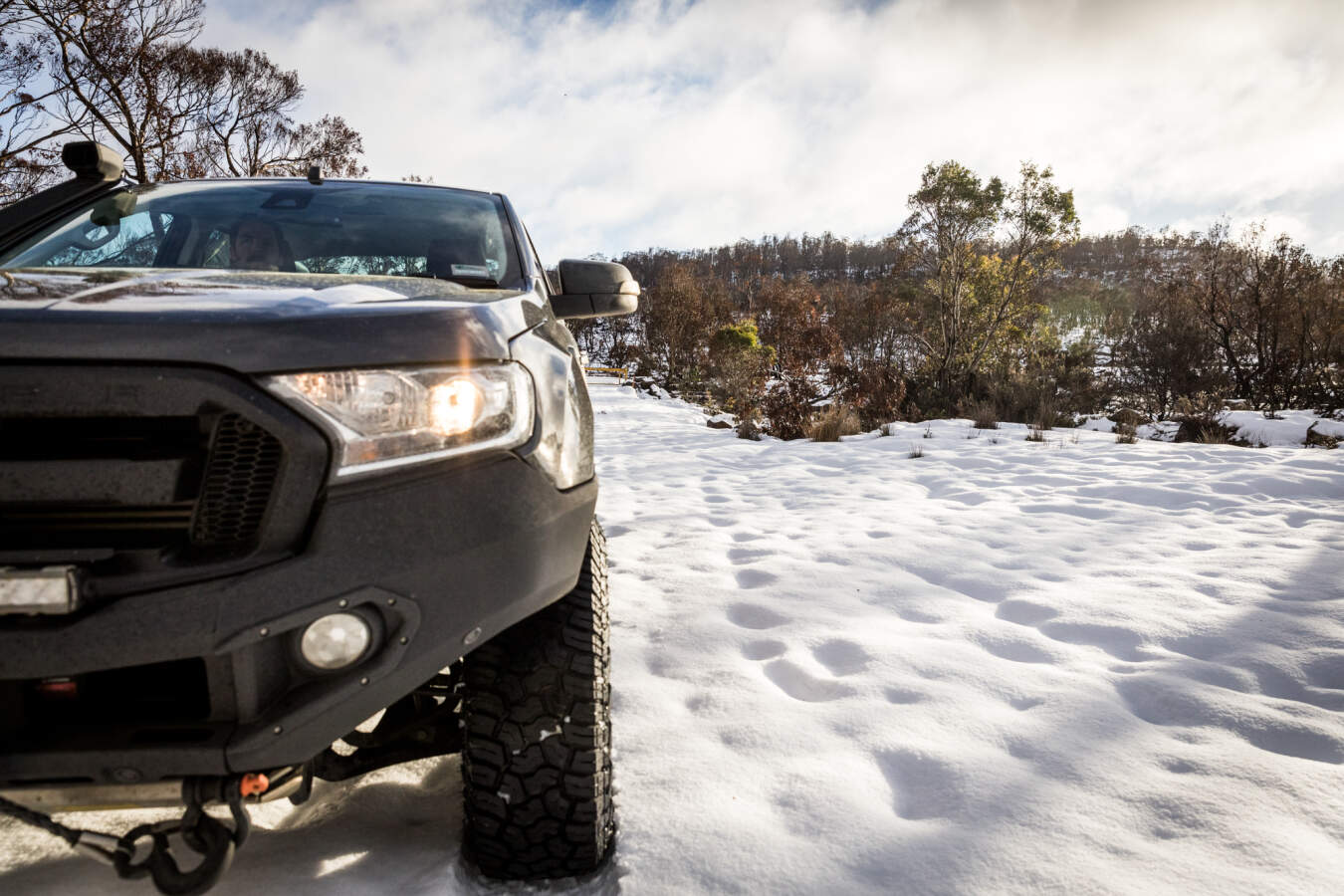 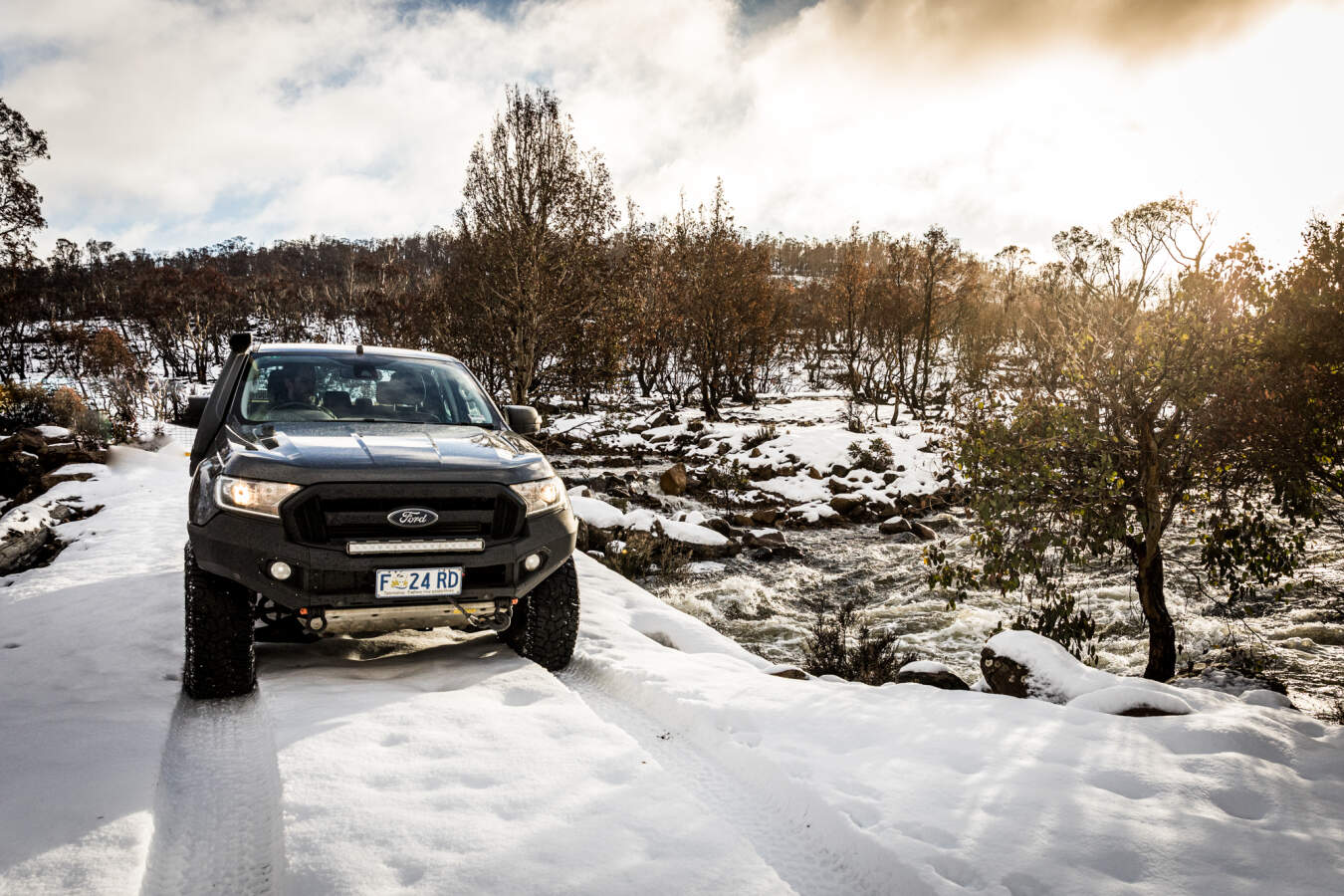 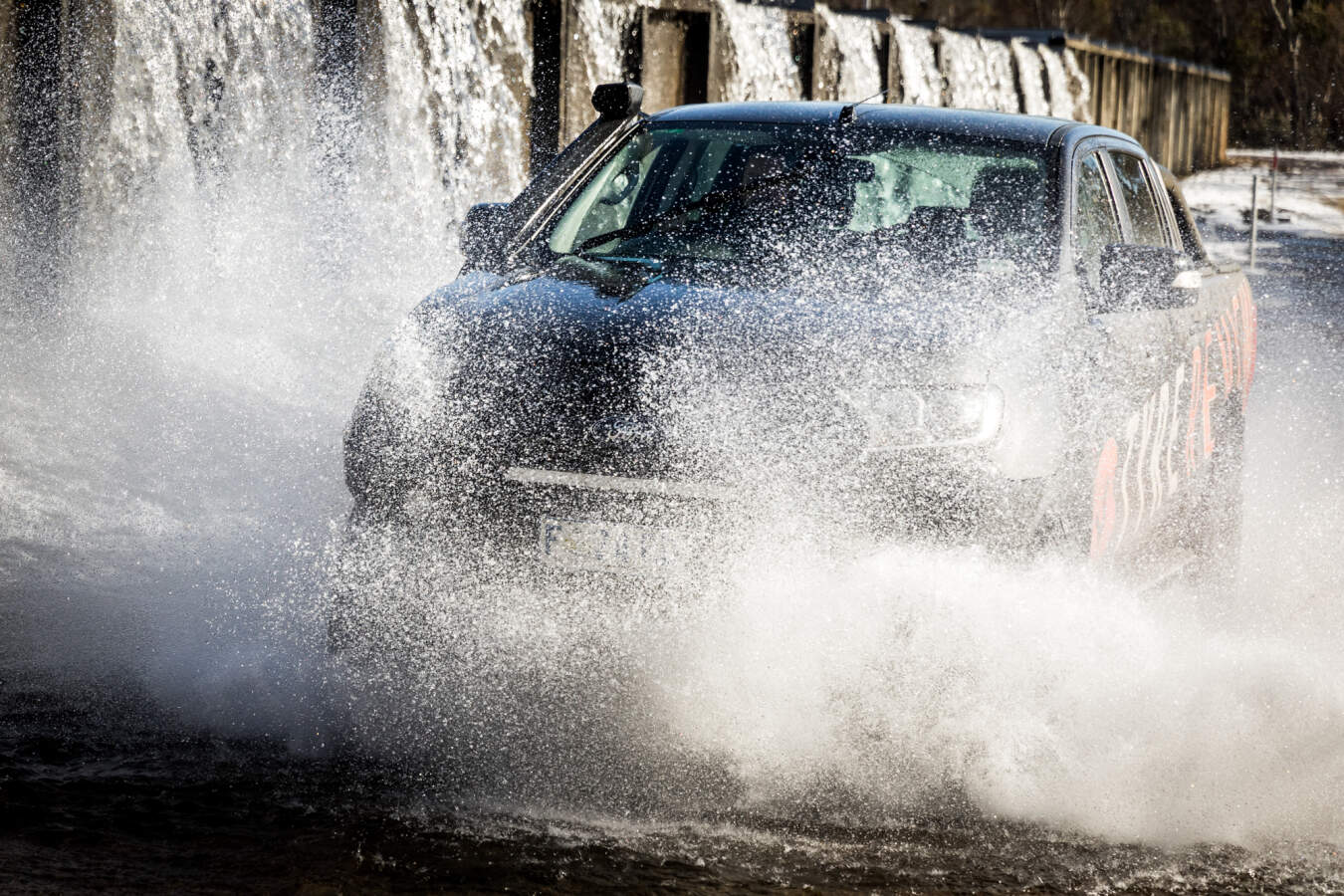 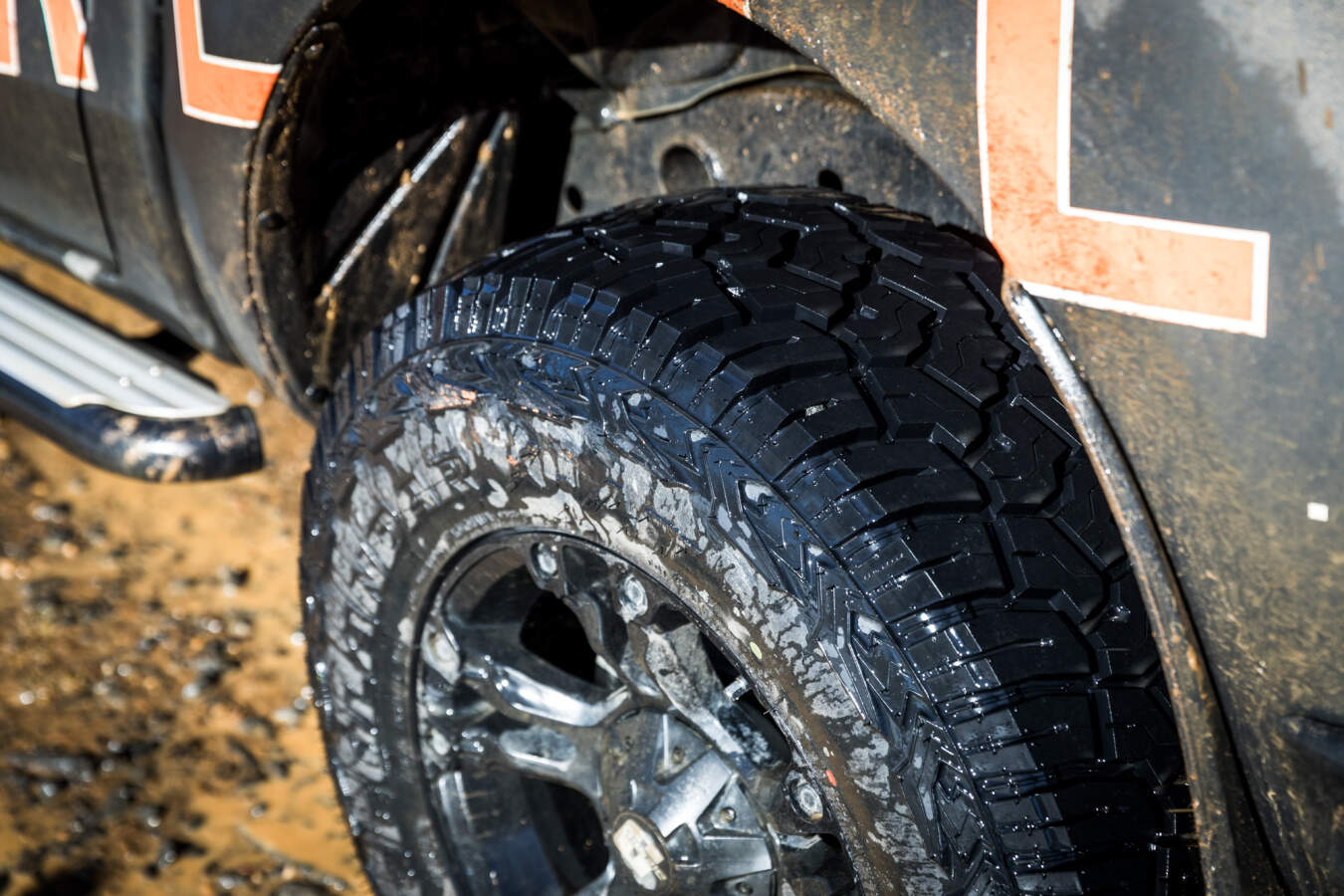 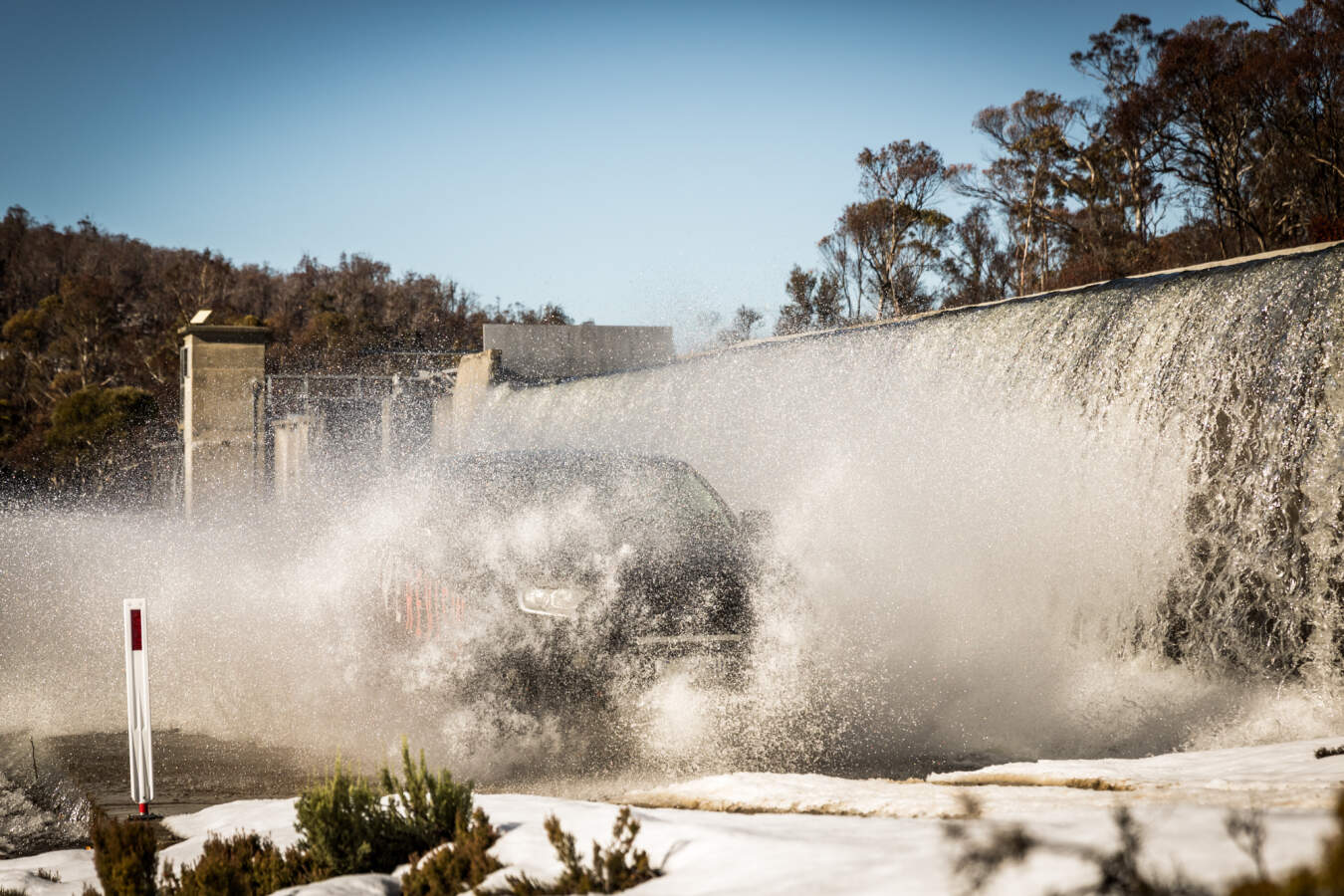 The Yokohama Tire Geolandar X-AT is almost here! We got our hands on this as-yet unreleased tyre, and had a squiz at it in the studioRead the full article >

Our long term review for the Yokohama Geolandar X-AT GO16 is in! Check it our on Tyre Review or our Youtube Channel.Read the full article >